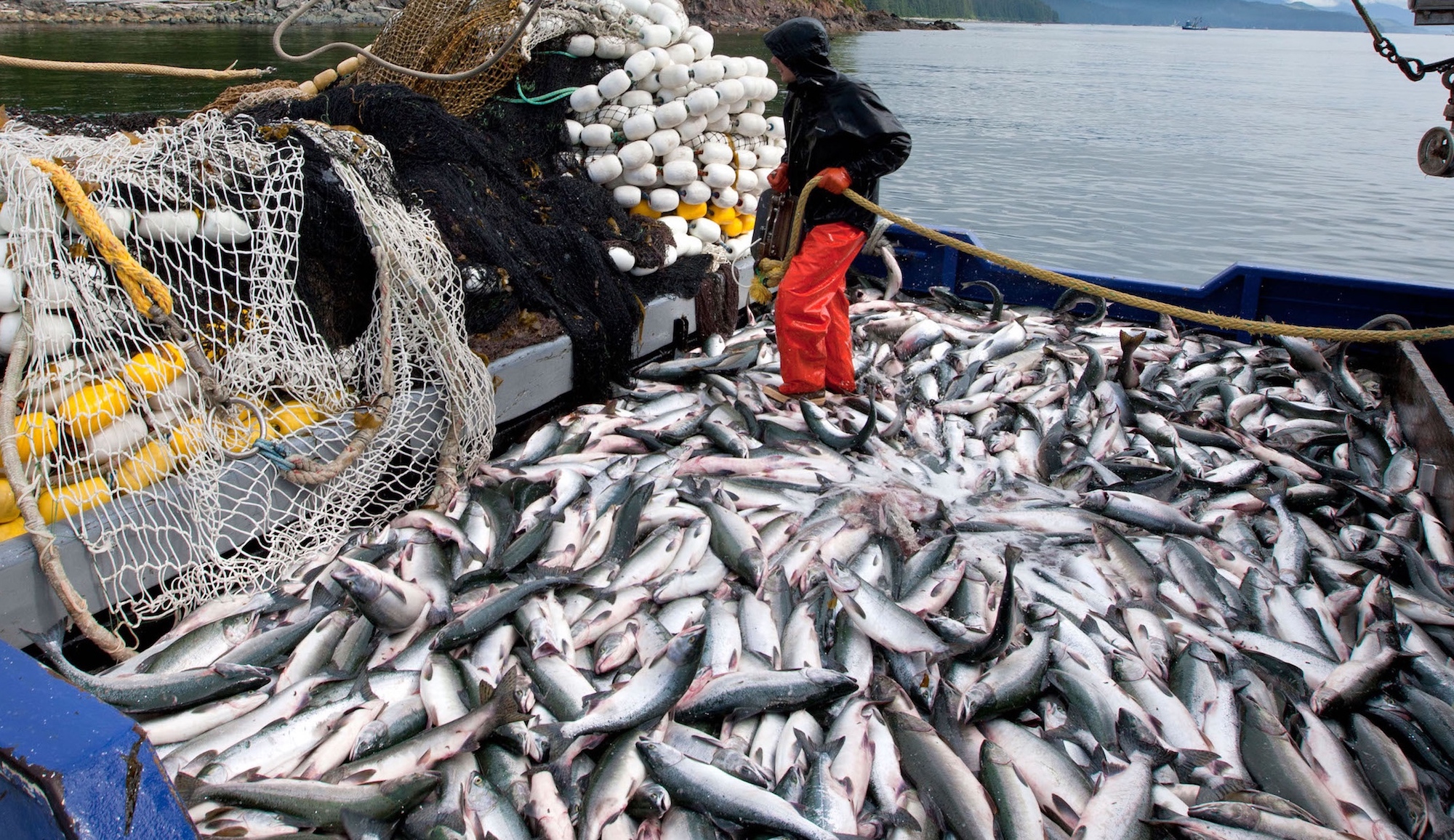 Many of B.C.’s largest salmon runs pass through Alaskan waters on their way home to spawn in Canadian rivers.  In 2021, while B.C. commercial fishing boats remained tied to the dock, the Alaskan fleet harvested over 650,000 Canadian sockeye. In 2021, of 200,000 Chinook caught in southeast Alaskan fisheries, 97% were bound for B.C. and Washington rivers. A huge number—likely millions—of pink, coho and chum caught in Alaska were also headed for Canadian rivers.

What are interception fisheries?

How many Canadian salmon and steelhead are killed in Alaskan interception fisheries?

In 2021, over 700,000 sockeye salmon were caught in southeast Alaskan interception fisheries, the majority coming from Canadian streams.

Nearly 28 million pink salmon were caught in these same fisheries in Alaska, with an unknown proportion being of Canadian origin.

Over 1.1 million chum salmon were also caught in interception fisheries, and while many of these were produced in Alaskan hatcheries, the catch also caught a significant number of North Coast and Central chum salmon from populations of conservation concern.

Over 200,000 chinook were harvested, the vast majority from  B.C. and Washington.

An additional unknown number of Chinook and steelhead were caught and released (almost certainly dead) in seine fisheries. 1.5 million coho were also harvested, again with an unknown proportion of B.C. origin.

The numbers above do not include salmon returning to transboundary rivers.

Why don’t we know how many Canadian salmon and steelhead are caught?

Catch monitoring is non-existent or inadequate in many fisheries in southeast Alaskan. Each fishery is sampled in a different manner, and estimates are made using different methods for different species. For some areas, fisheries and species, (e.g. Skeena, Nass and Fraser sockeye in seine fisheries, and Chinook in troll and recreational fisheries), we have relatively good information. For coho, pink, chum and steelhead we have little to no information of Alaskan interception impacts.

Further, what little information we do have is out of date. Catch estimates for pink and chum in many seine fisheries in Alaska are based on migration patterns determined  through studies now nearly 40 years old and likely no longer valid due to global warming-caused changes to ocean temperature patterns and food webs.

Isn’t Alaska a world leader in sustainability when it comes to fishing?

Canadian commercial fishers are required to return non-target species like steelhead and Chinook to the water with the least possible harm. Don’t Alaskan fishers do this, too?

Unlike Canadian seine fishers, fishers in Alaska are not required to return bycatch species to the water with the least possible harm. Nor are they required to report the number of steelhead and chinook they release. Further, there is no independent monitoring of fisheries in Alaska as is required for many Canadian fisheries. Alaskan bycatch is most often sorted when the load is delivered, hours, or even a day or more, after the fish were caught and killed.

Not necessarily, fishery managers in Alaska open fisheries with little consideration of how many Canadian or southern US salmon and steelhead may be present. Even relatively small Alaskan harvest of depressed BC salmon and steelhead populations can have big impacts. Alaskan interception fisheries are compromising our conservation and rebuilding efforts and limit fishing opportunities for Canadian First Nation, commercial and recreational fishers.

Isn’t there an international treaty that protects Canadian salmon?

The Pacific Salmon Treaty provides little protection against southeast Alaskan interceptions of most Canadian salmon. The treaty was established in 1985 when salmon were abundant. The Treaty’s objective was to balance each country’s interceptions of the other’s salmon, particularly chinook.

Since the Treaty was first signed, Canadian and southern US salmon stocks have declined to the point where many are threatened or endangered. Canada has closed most of its commercial interception fisheries to protect its remaining salmon and steelhead stocks. Alaska now has the only major interception fisheries in place that target salmon and steelhead returning to Canadian and southern US rivers.

Why is the southeast Alaska seine fishery certified as sustainable by the Marine Stewardship Council?

It is certified because of a ‘loophole.’ The southeast Alaska seine fishery would likely not have been certified without conditions if the endangered Canadian salmon and steelhead populations caught by Alaska were returning to Alaska.

MSC’s methodology for the certification of fisheries requires accurate catch and mortality data be recorded and publicly reported, and action be taken by fishery managers to reduce fisheries impacts on their own non-target or bycatch species where there may be a conservation concern.

But because Canadian-origin salmon and steelhead are returning to another jurisdiction, the Marine Stewardship Council (MSC) does not require the same of Alaskan managers.

If the Alaskan interception of Canadian and southern US salmon and steelhead is permitted by international Treaty and an eco-certification, what can be done?

Pressure can be put on the Canadian federal and provincial governments and southern US states to take a stronger position in treaty negotiations. Also, Alaska is vulnerable to consumer awareness of sustainability issues in national and international seafood markets. Alaska’s interception fisheries, while so injurious to Canada and the southern US, are a tiny proportion (under 3% of total value) of Alaska’s annual catch of salmon. If consumer awareness were to be raised in key seafood markets about the impact of Alaskan interception fisheries, Alaskan government and business leaders, managers, and fishers might be persuaded it would just be good business to organize their fisheries to harvest their own fish in a manner that avoids Canadian and southern US salmon and steelhead.

What can I do?

You can take action by emailing your MLA or MP and telling them it’s time to stand up for B.C. salmon.

Read the Alaskan Interceptions of BC Salmon: State of Knowledge report.

The decimation of our salmon stocks by Alaskan fleets MUST be stopped.  Take action and help give Canadian salmon a chance.

The decimation of our salmon stocks by Alaskan fleets MUST be stopped.  Take action and help give Canadian salmon a chance.